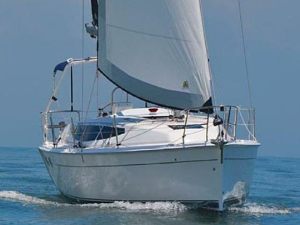 Glenn Henderson, the designer of many Hunter / Legend Yachts, tells his own story

I began sailing at 10 years old sailing Optimist prams in the Boy Scouts. My scoutmaster saw I had an interest early on so he began taking me on races at the Boca Ciega Yacht Club sailing his New Horizons 26. That boat was actually the predecessor to the famous Tartan 27. Then I learned many racing skills and also how to scrub the bottom of a boat.

Besides sailing, I entertained myself during my high school and college days with recreational surfing. Then I learned how to build surfboards and that is where I obtained my first skills with fiberglass. I built a plywood dinghy out of scavenged materials I almost died on. I had an old heavy army jacket with lots of pockets. To increase righting moment out on the trap, I would stuff the pockets with pieces of broken up concrete blocks. The army jacket was good and heavy when wet as well. I venture to say when your are sinking underwater, it takes a long time to remove pieces of concrete blocks from the pockets of an army jacket.

After university, I saved and bought a 26' Pearson Ariel for $7000. It was in foul shape so that is when I learned a lot about boat repair and reconditioning. After I had the boat "fixed up"; I took off for a cruise through the Caribbean. It was very basic sailing, as I had zero electronics except for a cassette tape player and a broad band radio. It was on this trip I learned celestial navigation and advanced cruising skills. One skill I learned was saving money. As I had little I spent a total of $186 that year. It was great getting fish off the reef or trolling offshore. Learning how to live off the land and sea became pretty easy and one could not live a healthier lifestyle. After a year of that I returned to the states a bought a 31' Van de Stadt design Ohlson 31. She was built in Sweden and you could beat the devil out of her and she would take it. It was a CCA type design and had long and pretty overhangs with a counter transom. It was a beautiful design. Every time I rowed out to her at anchor I could not help but to admire her beauty. She wasn't super fast but she would take anything. This boat I stayed on for several years. During this time I took the Westlawn School of Yacht Design course. After many landfalls in the Caribbean and the Pacific, I lived on her in the states after starting my business. That business was building wood products and custom interiors.

That business evolved into boat repair. I also became certified as an IOR/IMS measurer. This is where I was introduced to Grand Prix racing. Being the Florida area measurer had me working on boats that sailed in the SORC and 50' class races, all the boats you saw in the magazines. It was a thrill to be around all the excitement associated with high profile racing. Being involved with and around the state of the art designs was an inspiration.

Because I was living on the boat and in the shop, my expenses were low. With help from relatives and friends I designed and built the "Master Blaster". It was a 21-foot cold molded plywood boat. It came out good. Odd thing about it was a construction accident turned into one of my best design features. When we set up the frames, we accidentally set the last frame about 15mm higher off the datum than it should have been. This had the effect of pulling the transom lower toward the waterline than intended. It was not noticed until the hull was planked, much too late to correct it. It formed an "S" in profile in the last part of the underbody. It wasn't a gradual curve upwards as was popular at the time but actually a return to the direction of the waterplane. The boat flew in all conditions. Later as I became more intelligent, I surmised that this "reflex" as I called it, flattened out the stern wave and artificially extended the sailing length (LWL) of the boat. There were other effects but it was all good. I got lucky.

At any rate, I enjoyed the designing, building, racing and winning with boats. I then decided to build production boats. The first was a 17-foot dinghy that I built about 25 of. The second was the SR Max 21. It was the first boat I designed with computer. The analysis ability made me dizzy thinking of all the possibilities. It really opened the door to better-designed boats. This model did well and actually was able to pay for my company's growth. I continued by adding the SR 27, the SR 25 and the SR 33. In 1994 I sold that company to C&C Yachts and began my design office, Henderson Yacht Designs, Inc.

I spent the year of 1995 in Trinidad and Tobago setting up SOCA Sailboats. They build the production Henderson 30 and Henderson 35 of my design. I then began designing custom and production boats and also reconfiguring keels, sail plans and rudders.

In 1999, Hunter Marine offered me a position as Chief Designer. I accepted and ended up designing every model in the line from 21 feet to 50. At Hunter I had access to computer power and programs few designers could obtain. Also being directly involved with the construction and production taught me things I couldn't have learned designing only custom or low production boats.