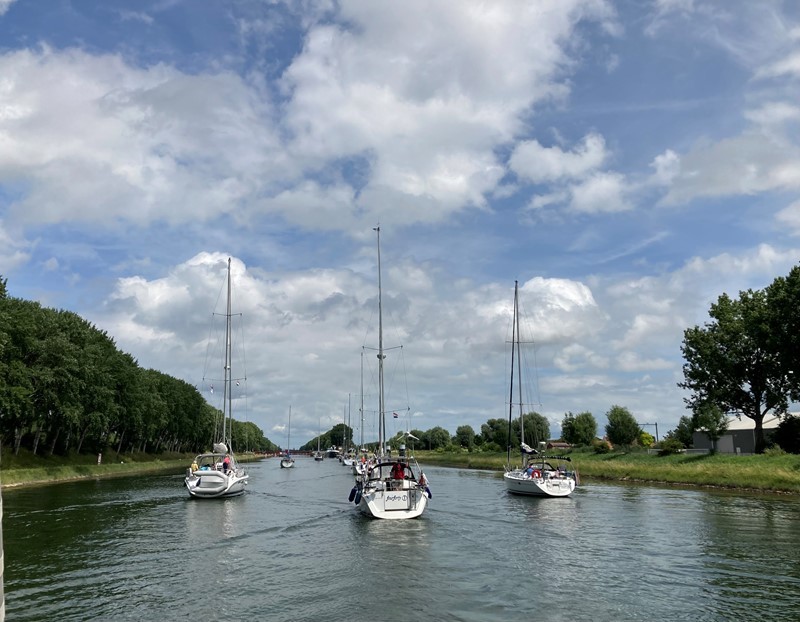 A brief update from the Commodore, following 'East Meet South'

East has Met South in Holland, with a touch of Wales in there too!

Our 'Go as you please - Cruise in Company - in Holland' event has concluded and all those attending would thoroughly endorse it as a huge success. On the cards since 2019, it finally happened!

There were many highlights but perhaps the one which touched me the most was at Cadzand on 24th June, when all those who had signed up for the event were all present and correct, bang on time. A pontoon reception brought all the crews together, busily chattering about their varied crossings. Many of the South fleet had been caught in heavy seas off Beachy Head (force 6, wind over tide). Anchors dug in and big greenie waves over the bow, but all made it safely to Eastbourne. John Thomson on Nirvana had to unfortunately turn back from Eastbourne, after all that, due to a lack of positive forward propulsion (still under investigation) - such a disappointment after John had done much of the passage planning.

Event highlights included; the wonderful towns visited, the glorious weather, the first stop at Middleburg that all were able to enjoy (we didn't think we could get all 8 boats in, but thanks to Neil Spooner - Pelican, who had gone on ahead and organised things with the Harbour Master, a full group night was to be had), overnights on uninhabited islands, picnics in company, the hospitality of the Dutch people (delighted to see the Brits back again) and the camaraderie of those present, with the WhatsApp group that kept us all together.

Of note, Paul Edwards and crew on Menaka had transported one Andy Baucutt from the UK to Middleburg, who then went on to cycle to Verona (1420 km/900 miles) in 10 days - climbing over 33,000 feet en-route, to raise money for the Sarcoma Charity. We waved him off and got to hear of his success, as we had been cruising around in the sunshine.

John Blake - Silver Moon - not only shared his knowledge of the area, but also linked us all up with has friend Frank and his wife Margarite, a Dutch couple who used to own a Legend in Holland. Frank invited us to his Sailing Club/Marina at Sint Annaland, where those who could make it attended a splendid mid-event dinner in the restaurant, overlooking the water. This really became the last of the mini link up Rendezvous events.

Leggies made their various plans for home going, avoiding the odd day of dubious weather.

Thanks to Peter Hurwood who helped me to organise the event - There will no doubt be more East meets South events in the years to come.

Holland will remain a firm favourite destination in many minds - it was particularly encouraging to hear that the LOA cruise in company approach had given the opportunity and confidence to those who may not have otherwise ventured to Holland. There will be some photos growing in the Gallery and a full report in Wavelines 2023. In the Meantime....

Wavelines 2022 has been despatched. It has been quite a marathon and I am sorry it's later than usual. Let me know if your copy doesn't arrive!

Other Rendezvous events have occurred with a good deal of success, for example - Island Harbour, Swanwick, Bembridge BBQ, West Mersea. The Ramsgate Jubilee event was unfortunately disrupted by the weather. But with the weather in heatwave status at present, do look forward in your fresh new Wavelines to page 5 where the future events are all featured.

I encourage as many of you as possible to join in. Especially new members (of which there are 25 this year, so far!) who may feel a little nervous about meeting others and what a Rendezvous is all about - You will be made very welcome and will have a really enjoyable time!

Don't forget there will be a photo competition and an articles competition for the next Calendar and Wavelines - so keep on snapping and logging your cruises and technical improvements - Details will be available in September.